The 4074 Community & Beyond Facebook group started on 14 April 2013 and was the vision of a local who has resided in the Centenary suburbs for over 20 years. With the popularity of social media, the group was formed with the main purpose of the community coming together to share news, seek advice on services, promote businesses and advertise events that are all relevant to the local area.

This website was built to expand on the Facebook group, where the community can find all resources in one area. On this basis, we have put together information on local businesses, dining out, events and other local happenings. The website will continue to grow and change as per the needs of the community as it is this voice that speaks the loudest.

The Centenary Suburbs are a group of seven suburbs located in the outer-west of Brisbane, Queensland, Australia, bordered by the Brisbane River to the North and West, the Centenary Highway to the east and Wolston Creek to the south. The area was given its name by developer Hooker Rex in 1959, Queensland’s centenary year that marked its separation from New South Wales in 1859. All suburbs have the postcode of 4074.

Originally the land was all known as Jindalee, indeed the 1967/68 Australian Scout Jamboree, held in what is now Jamboree Heights, is recorded as being held in Jindalee. From 1960 onwards Jindalee was progressively broken up into smaller suburbs, being:

While originally referring to new suburbs west of Centenary Highway, the descriptor of ‘Centenary Suburbs’ is now arguably applied to include also the new residential areas developed on the eastern side of that highway, namely Sinnamon Park and Seventeen Mile Rocks (postcode 4073): 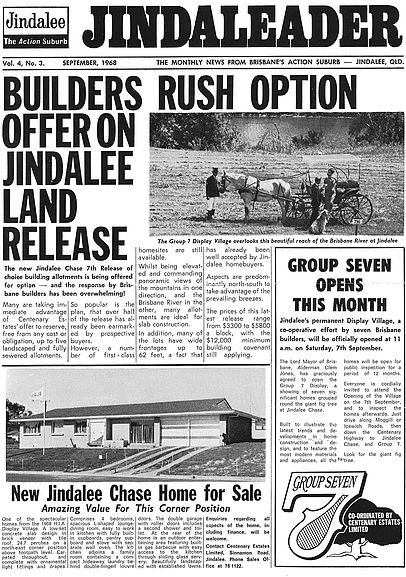